Vitamin D is best given frequently in moderate doses

We normally synthesise vitamin D by the action of the sun on our skin during the summer, and the reserves built up during this time will last us throughout the winter. This indicates that vitamin D can be stored within the body, and because vitamin D is an oil it is stored in the liver and in body fat.

This has led to vitamin D supplement sometimes being given in a single large dose, a “bolus”. This can be an injection, and the dose of vitamin D as ergocalciferol is usually 300,000 or 600,000 units. It is to be given only once or twice each year and the assumption is that it will go straight into the fat of the body and then it will be released gradually over several months. It appears to be very convenient.

But it is not quite so simple in the human metabolically active environment  and this is not the way in which nature works. The normal pattern is for a gradual accumulation of vitamin D during the summer months. Experience now informs us that vitamin D supplement given as a single large dose is not as effective as when given as frequent smaller or moderate doses. 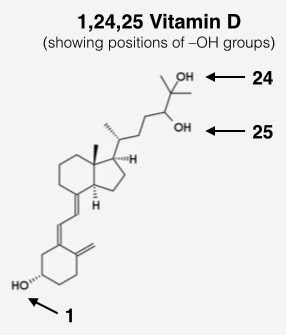 Vitamin D is a pre-hormone, meaning that it must be converted into an active hormone. This occurs when a third hydroxyl group is added, this time in the 1 position, forming calcitriol, 1,25(OH)D. This process takes place predominantly in the kidneys, but also in some inflammatory cells.

The de-activation of calcitriol is, like its synthesis, controlled by a genetically determined enzyme. Similarly it adds a hydroxyl group to the molecule, now a fourth group and this time in the 24 position. The result of this hydroxylation is 1,24,25(OH)D, which has no biological activity. 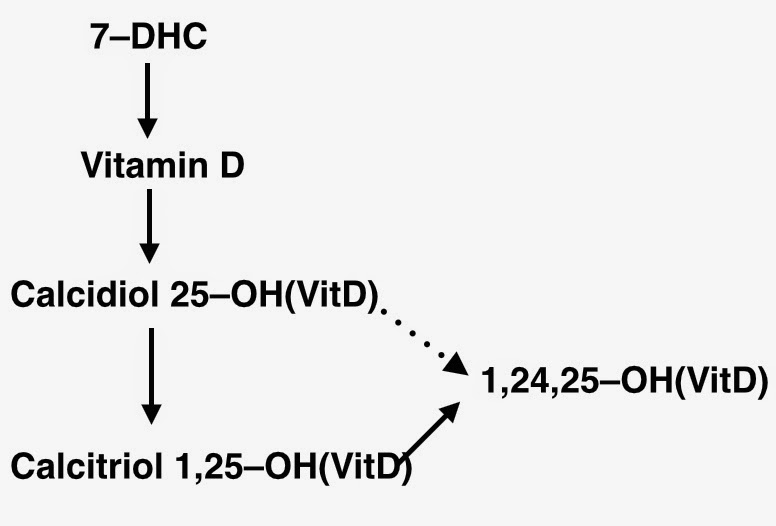 All is well when vitamin D synthesis develops gradually during the summer months. But when we interfere with the process of nature things can go wrong.

The synthesis of vitamin D in the adult is in the range of 2,000 to 3,000 units per day, depending of location of residence and lifestyle. If vitamin D is synthesised for about six months of the year, this would amount to between about 300,000 and 600,000 units per year.

The body does not expect to receive six months or a years vitamin D in a single dose. When an injection of 300,000 or 600,000 units is given, the metabolic assumption will be that this is the start of a regular input of vitamin D and so it must be followed by a similar level of inactivation. 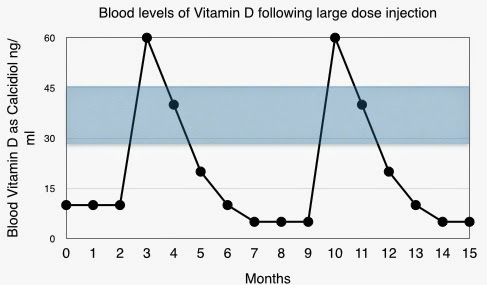 The message is that vitamin D should not be given in large bolus doses as this will result in a low blood level of vitamin D. It should be given gradually as in nature. Daily or weekly doses of vitamin D are fine, but single doses at intervals of a month or more are to be avoided.

This information has been presented by Dr Reinhold Vieth of the University of Toronto, Canada.