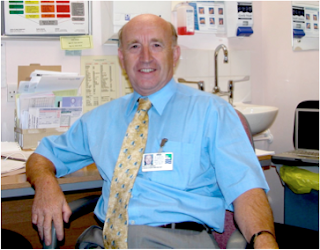 David Grimes was born in Salford in 1943, and was brought up in Prestwich, north Manchester. His secondary education was at Stand Grammar School in Whitefield, and then at Manchester University. He qualified in medicine in 1966, undertaking training posts at the Manchester Royal Infirmary. Further training was at St George’s Hospital London as a registrar, returning to Manchester as a senior registrar. In 1977 he was appointed a consultant physician with a special interest in gastroenterology, at the Blackburn hospitals, and he has worked there ever since. In addition to busy clinical duties, he has also been involved in medical management, becoming medical director of the hospital trust for ten years. He has also contributed much to medical education, in Blackburn and in the northwest region.

His extensive day-to-day clinical practice meant that the wards and the outpatient clinics became his focus for research. This clinical experience together with extensive reading and research led to his realisation that vitamin D held the key to understanding many illnesses. For a thesis based on his research he was awarded the degree of MD University of Manchester in 1993. More information was being generated internationally and ideas were developing - especially the remarkable properties of statin drugs, which he suggests are acting like vitamin D itself. Several publications in leading journals were not enough to deliver the big picture that he had developed, and a book became necessary.

David’s leisure time is spent gardening and travelling, with more than twenty years as a scout leader. He also has a long interest in the industrial history of North-west England. Much time is also spent with his family, now that he and his wife Jenny have several grandchildren from their three children.
Email ThisBlogThis!Share to TwitterShare to FacebookShare to Pinterest
Home
Subscribe to: Posts (Atom)