A simple view of the ECG

A simple view of the electrocardiogram (ECG)

This Post should be taken together with the Post entitled:
"The epidemic of coronary heart disease – the peak in 1967–70”. 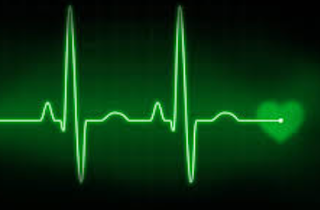 There is no necessity to go into details and I will indicate only the basic features. The reason for doing this is that many of my Posts have been on the subject of coronary heart disease (CHD), the major clinical consequence of which is myocardial infarction (MI), loosely called a heart attack. The ECG is a major defining feature of the MI. A Post on this subject will appear shortly and so I have written this Post on the ECG in anticipation. To include clinical MI details and details of the ECG in a single Post would be cumbersome.

The standard ECG has 12 simultaneous recordings taken from nine leads, each looking at the heart from a different direction and therefore able to detect abnormalities in different parts of the heart. I will not go into any detail, about these 12 recordings. 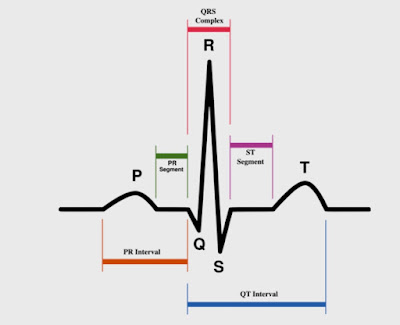 The QRS complex has three components, Q,R and S.

It might be asked as to why the nomenclature of the waves is in the form of the letters “P….T”. The answer lies in the history of the electrical recording of the heart.

There is no necessity to go into the structure of the heart in detail, just a reminder of the circulation sequence of right atrium, right ventricle, pulmonary artery and circulation through the lungs, then left atrium, left ventricle and aorta leading into systemic circulation. 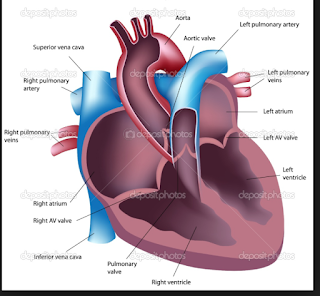 The heart has a natural pacemaker to control its rate to to stimulate an orderly contraction. It is called the sino-atrial (SA) node and it is situated in the right atrium, at the point of entry of the major veins, the superior and inferior vena cava.

The electrical impulse that stimulates contraction of the heart muscle starts in the upper part of the right atrium and spreads across both atriums. It is picked by a secondary pacemaker, the atrioventricular (AV) node, which is situated it the junction of the atriums and the ventricles. This passes the signal though two bundles of conductive tissue, one in the wall of each ventricle. These stimulate an orderly contraction of the ventricles.

How the heart works

During the 1780s Luigi Galvani (1737–1798) at the University of Bologna, followed by Alessandro Volta (1745–1827) discovered that muscles contract (twitch) in response to electrical stimulation, the “frog legs experiments”. The interaction between electricity and muscles was far from clear, but during the following century it gradually became more clear. 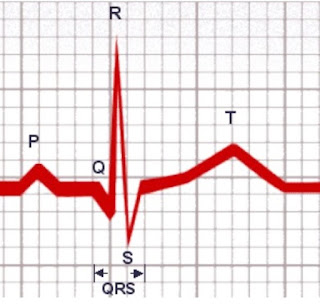 The QRS complex is followed after a brief delay (technically the Q-T interval) by the T wave, representing the repolarisation of the ventricles. There is then a rest until the next heart beat, the next P wave.

The history of the ECG

The slow advances during the 19th century of the understanding of the physiology, the functioning, of the heart led to some practical albeit rudimentary developments. The British physiologist Augustus Waller (1856–1922) was a lecturer at St Mary’s Hospital, London. In 1870 he invented a device for recording the electric activity of the heart. He used “A,B,C….” to identify the recorded phases of the heart beat. He used a capillary tube filled with mercury to identify the electrical impulse of the heart, a change in height of the mercury column allowing a pattern to be observed.

In 1902, the Dutch physiologist Willem Einthoven constructed a different type of machine, a string galvanometer, which was very cumbersome and required five men to operate it. When it came to a side-by-side assessment of the two machines, the wave-forms on Einthoven’s ECG were given the symbols “P,Q,R,S,T”. Despite being of no practical value in respect of patient care (remember that Einthoven was a physiologist and not a clinical cardiologist) it proved to be a superior method of recording heart  activity and its nomenclature has persisted. It was about 15 years later that the ECG came into clinical use, and the machines have become much smaller over years.

The use of the ECG

Early concerns were of the functioning of the heart, and they were purely academic studies. Coronary heart disease (CHD) and myocardial infarction (MI) were almost completely unknown at the time of Waller and Einthoven.

Earlier, before his fame and knighthood, Sir James Mackenzie (1853–1925), the father of English cardiology, was working in Burnley, Lancashire, and at its hospital (where I worked). He invented a mechanical “polygraph”, a device that recorded the rhythm of the heart.

The subsequent electrical recordings were superior but it was only the rhythm of the heart that was of clinical importance.

The most well-recognised abnormality of rhythm is atrial fibrillation AF). The characteristic of this is a complete irregularity of the pulse, which might become very fast. If this is the case then the pulse will also be low in volume. The output from the heart (cardiac output) is low because the filling phase of the heart (diastole) is too short to allow the ventricles to fill adequately with blood. Also the final push of filling, atrial contraction, is absent.

Atrial fibrillation is a failure of the atriums to contract properly because they are “fibrillating”, that is very rapid unco-ordinated contraction of individual muscle fibres (cells). There are no P waves. The spread of the electrical impulse from the SA node into the atriums is impaired. The response of the ventricles via the AV node is haphazard, and so the ECG shows an irregularity of the QRS complexes.

Also common are ventricular ectopic beats, that all people might experience as a “missed beat”. They are only very rarely of importance. A ventricular ectopic beat occurs spontaneously, not triggered by or following an atrial beat. The ECG will show a QRS complex, out of sequence with the others and not preceded by a P wave. The QRS complex is likely to be a different appearance depending on the part of the ventricle from which it originated.

The atrial beats and ventricular beats can become disconnected, and this is called “heart block”. The P waves will be present and also the QRS complexes, but the sequence of them is random. The AV node is not picking up or transmitting the stimulus from the atriums. The ventricles will develop their own rhythm, but the rate becomes very slow. This causes problems such as blackouts, and an implanted artificial pacemaker is necessary to speed up the heart.

Finally for our purposes there is ventricular fibrillation (VF). The ventricles just fibrillate like jelly wobbling. There is no actual contraction of the heart and this is what happens in a “cardiac arrest”.

The ECG in CHD and MI

The ECG recorded from an individual tells us of events that have happened in the past - ten seconds ago or ten years ago. There is no prediction of the future.

Similarly there is no feature of CHD as such. CHD is a disease (atherosclerosis) that takes place in the arteries on the surface of the heart. The ECG tells us about damage to the heart muscle and the conducting tissue within the muscle.

Only when something is happening either now or in the past does the ECG become abnormal. Someone can have a normal ECG today but develop an MI tomorrow. We cannot predict future health from an ECG. There is no reassurance value from a “routine” ECG performed at a time of good health.

The detection of MI is the main use of the ECG, after identification of rhythm disturbances. It is quite simple and there are two specific changes.

A Q wave might appear, and this indicates major damage to the heart muscle. It is a permanent abnormality and remains as a historical marker of an MI in the past. When a Q wave is seen it cannot be concluded that an MI has just occurred. This would only be the case if it was not present on a previous ECG, or after other tests have been performed. A Q wave resulting from MI is often followed in the long term by an inverted T wave.

ST segment elevation after an MI is a temporary abnormality at the time of the event. If the ECG is delayed after the development of chest pain, the ST elevation might be missed, having resolved rapidly.

When the Q wave is associated with ST segment elevation the diagnosis of an acute MI is clear. This is a "STEMI", ST Elevation MI.

The ECG in angina

Angina used to be a disabling but not fatal result of CHD. It is recurrent chest pain occurring on exercise, due to a narrowing of a coronary artery. The ECG at rest is normal, but on exercise ST segment elevation might occur (the exercise ECG). There can rarely be transient elevation of the ST segment at the time of a severe attack of angina.

I hope that this brief review of the ECG is informative but not incomprehensible.