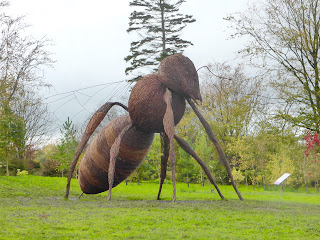 There is a new medicine now available for lowering cholesterol and thereby intended to prevent deaths from coronary heart disease (CHD).

A few short-term trials have been published that have demonstrated that evolocumab (evo-locu-mab) lowers the blood level of cholesterol very significantly, beyond the effect of statins. But a demonstration of clinical benefit is much more important, especially as we know, that despite what we are told, cholesterol-lowering is not related to reduction in CHD death rate.

Evolocumab is produced by the pharmaceutical company Amgen (see below). It is a monoclonal antibody that inhibits “proprotein convertase subtilisin–kexin type 9 (PCSK9)” and it thereby lowers low-density lipoprotein (LDL) cholesterol levels in the blood. Metabolic details are not important to us at present. There are now many monoclonal antibody medications, ending in -mab, and used in a variety of clinical settings. They need to be given by injection or infusion and they are expensive. They can be dangerous. 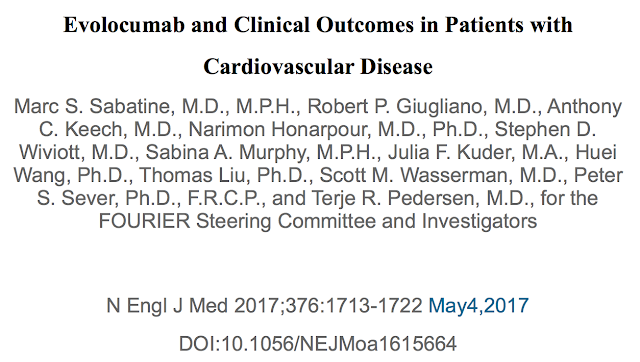 A randomised controlled clinical trial (RCT) has now been published in the prestigious New England Journal of Medicine (the FOURIER study).

The study was of 27,564 patients, aged between 40 and 85 years, with known atherosclerotic cardio-vascular disease, with blood LDL-cholesterol level 1.8 mmol/L (70mg per decilitre) or above, and already receiving statin therapy. The study took place in 49 countries.

The subjects were randomly allocated to receive either evolocumab  (13,784) by injection every two weeks (or every month in higher dose) or placebo (presumably saline) by injection (13,780).

There was a large reduction in blood level of cholesterol in the treated group, by 59% compared to those receiving placebo. But did this translate into clinical benefit?

At first sight, “yes”. There was a reduction of endpoints in those receiving evolocumab compared to placebo.

These results represent proportionate reductions of 9.8% and 7.4% respectively. This sounds good, but I have previously criticised clinical trial results for displaying proportionate changes rather than absolute changes, which better represent the real world.

What we are not told in the summary becomes more interesting than what we are told, but the details can be found in the full paper.

The composite endpoints mix deaths with non-fatal events, and this is a dubious method of analysis. There is in fact a slight excess of deaths in the evolocumab treated group than in the placebo group, but this is hidden within the composite bundle of events.

The strange thing is that the trial was stopped prematurely, when the median duration of treatment was just 22 weeks, and when the subjects recruited later had been in the trial for just a very short time. The initial plan had been to continue the trial for 4 years duration of treatment, and so why had it been stopped so early? The reason given is that at 48 weeks from the onset of the trial the result had shown a benefit from evolocumab – that is in the composite bundle analysis.

But at 48 weeks (the longest time that a subject had been in the trial) there was a slight excess of deaths in the evolocumab group, deaths from any cause and also deaths from cardiovascular disease.

The excess of deaths was small and when the trial was stopped it had not reached statistical significance. It would require 1000 people to receive the medication for about one year for one excess death to occur. But after 4 years (when the trial was planned to end) it almost certainly would have reached statistical significance. Premature ending of the trial avoided this likely serious and negative conclusion.

We must ask ourselves: is the trail really objective and honest? The trial results were presented with significant “spin”, that is the political ploy of presenting bad news as good news, in this case as the composite endpoints. The spin was enabled by the process of the "bundle of composite endpoints", in which deaths were lost.

The names of the authors of the paper are shown above. A look at some of their details (showing declared conflicts of interest) will give a clue as to whether they might not be objective. Amgen is the pharmaceutical company  that manufactures evolocumab.

ZAG reports personal fees from Amgen and Sanofi, during the conduct of the study.

IG-B reports personal fees and non-financial support from Amgen and Sanofi; and personal fees from Eli Lilly, Regeneron, and Aegereon, outside the submitted work.

JL-M reports personal fees and non-financial support from Amgen and Sanofi; personal fees from MSD and Laboratorios Dr Esteve, outside the submitted work.

FM reports grants, personal fees, and non-financial support from Amgen, MSD, Sanofi, AstraZeneca, and Pfizer, during the conduct of the study.

BRO reports personal fees from Amgen, during the conduct of the study; participation on a data safety monitoring board for Accera; and grants from Long Term Care Group, Merck, Eli Lilly, TauRx, Janssen, Biogen, Avid, and Hoffman-La Roche, outside the submitted work.

PSS reports grants and personal fees from Amgen, during the conduct of the study; grants and personal fees from Pfizer, outside the submitted work; and that he is the recipient of a National Institute for Health Research Senior Investigator Award and receives support from the Biomedical Research Centre Award to Imperial College Healthcare NHS Trust.

The expression “He who pays the piper calls the tune” comes to mind.

We can see the remarkable extent to which academic doctors can be funded by the pharmaceutical industry. This must influence the way which their findings are reported.

We must also remember that when a pharmaceutical company funds a clinical trial (as in this case) the company will "own" the data and have a veto over the presentation of findings.

The economics of pharmaceutical development

There is a real problem in respect of pharmaceutical development in general and evolocumab in particular.

The development of any pharmaceutical agent today will cost a minimum of $1 billion, and there is always the possibility that the agent might fail because of unforeseen side-effects. The $1 billion needs to be recovered from sales, and the price of the medication will depend on the predicted number of prescriptions.

Statins provide an example of the ideal. They are taken by millions of well people every day for many years. The huge volume of sales will result in low unit price or vast profits, or both. In 2001 cerivastatin had to be withdrawn because of untoward effects (muscle damage) resulting in a large financial loss to the company (Bayer).

A contrast would be a new antibiotic, and there are not any. Excluding their animal growth-enhancing use, an antibiotic is given for only a few days for an individual person. The low volume of sales will mean that the price of a tablet or injection will be very high, and this will inevitably inhibit use. The £1 billion development cost is not likely to be recovered from sales. As new antibiotics are considered to be in the public interest, the debate is whether antibiotic development should be funded by pharmaceutical companies or governments.

The economics of evolocumab

A non-fatal stroke is an illness that most people dread as it can lead to long-term disability. It is therefore important to look at stroke prevention within the bundle of “composite end-points”.

The number of deaths from stroke differs very little between the two groups. The number is not actually important if total deaths are effectively the same. Changing the cause of death within a given time-scale is not the objective of medicine.

It would be necessary for about 23,000 people to be treated for ten years to recover the £1 billion development cost. This does not include the costs of marketing. The recovery of all the costs would be required to provide a dividend to shareholders and to fund the development of the next product. The stakes are high and it must be important for economic reasons for evolocumab to be taken into widespread clinical practice.

Clearly it is essential for a trial of clinical effectiveness to be successful and to be published, ideally in a prestigious journal. And so we see the publication in the New England Journal of Medicine. The spin indicates success. Conclusions do not reflect results.

There was no “saving of lives”, no matter how many patients might be treated and no matter how many injections of evolocumab might be given. Prevention (delay) of death is by far the most important outcome measure and other cholesterol-lowering trials have identified this.

A 59% reduction of cholesterol had no mortality benefit, which is against the predictions of the cholesterol-heart hypothesis. The frequently repeated message is that cholesterol-lowering is associated with an arithmetic reduction of CHD deaths, and this is clearly not true. It is also clear from the WOSCOPS statin trial.

The economics of pharmaceutical development is highly vulnerable.

Will the providers of health care, individuals or pre-payment insurance organisations (whether or not government based) be prepared to fund evolocumab?