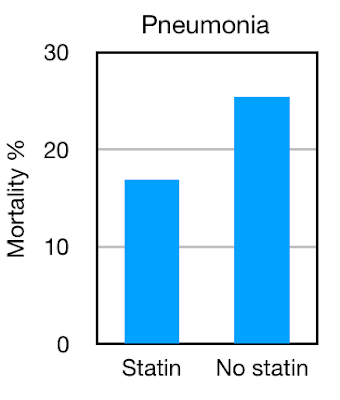 In 2006 I suggested in an article in The Lancet that in addition to their ability to reduce blood levels of cholesterol, statins had effects similar those of the sun and vitamin D. They have a variety of actions that can improve health, among them to improve outcome from infection. These have been empirical observations but we can now see something of the mechanisms involved.

The sun is alleged to be the best disinfectant, and we know that vitamin D amplifies the protective inflammatory response to infection. But what about statins? It now appears that statins do not obviously enhance immunity, but they have a direct anti-bacterial action.

On the UK television recently I watched a travel programme in which the presenter, Joanna Lumley, visited a fisherman called Sergei in his family home in Irkutsk ("Big Cat Village"), adjacent to Lake Baikal in Siberia. In the kitchen there was a large bottle that contained a liquid in which there was a mould or fungus, known as "Manchurian Mushroom". The bottle of liquid was called "Kombucha" and Sergei explained that this was the traditional family medicine, to be taken at times of illness.

It would appear that moulds have been used for several centuries for health benefits and in particular to treat skin infections. In his excellent book The Diet Myth, Tim Spector suggests that of all foods that are alleged to be good for us, mouldy cheese is the main one that stands up to scrutiny.

However the important step forward was the accidental discovery by Sir Alexander Fleming in 1928 that the mould Penicillium notatum was able to produce a powerful anti-bacterial compound. It inhibited the growth of the important human pathogen Staphylococcus aureus, which he was investigating at the time. The active compound produced by the mould became known as penicillin.

Other moulds were subsequently investigated for antibiotic properties, with streptomycin being isolated in 1943 from the soil fungus Streptomycin griseus. The first of the antibiotic group cephalosporins was produced from a mould discovered in 1945 in a sewage outlet in Sardinia.

It was realised that the value of antibiotics lay in the inhibition of bacterial metabolic pathways and one that had been identified as fundamental was the 3-hydroxy-3-methylglutaryl-Coenzyme A  (HMG-CoA) pathway. This pathway synthesises the very important cholesterol, and it was thought that blocking this pathway would seriously damage micro-organisms.

In 1971 the microbiologist Professor Akira Endo in Japan discovered a natural inhibitor of the pathway in a broth of the mould of Penicillium citrinum. The compound, which was named compactin or mevastatin, inhibited the enzyme HMG-CoA reductase. The first statin had been identified.


A more powerful HMG-CoA reductase inhibitor was identified in the fermentation of Aspergillus terreus, in the laboratories of Merck pharmaceuticals. It was called mevinolin, or lovastatin. The group of compounds isolated became known as statins, and the anticipated role was as to kill bacteria.

The antibacterial action turned out to be weak, but the inhibition of cholesterol synthesis and the ability to reduce blood level of cholesterol was powerful. Thus began the highly successful development of statin cholesterol-lowering medications. Statins came to be taken daily by many rather than infrequently by few.

There is at present great concern about widespread resistance of many pathogenic bacteria to antibiotics in current use. The challenge is a future without effective antibiotics.

In recent years there has been a failure of pharmaceutical companies to develop a new antibiotics, and there is not the slightest reason to expect a government body to be any more successful. The problem is that the cost of developing any novel pharmaceutical agent is almost $2 billion. The recovery of this investment is challenging. There is a view that a new antibiotic must be held in reserve for use only when absolutely necessary. An antibiotic is given for only a short course of a few days, and so the cost per tablet will inevitably be very high, and perhaps prohibitively so. The appearance of a novel antibiotic is by no means certain, and the chance of recovering development costs is very doubtful, especially if its use is restrained.

But the cost of development would be much reduced if an existing medication, fully tested with a good safety profile in the short term, could be shown to be antibacterial. And so now there is a renewed interest in statins, to be used as originally designed.

The anti-bacterial effect of statins in vitro

Statins exhibit antibacterial activity against a wide spectrum of Gram-positive bacteria. These include the following:

Statins have also displayed antibacterial activity against a range of
Gram-negative bacteria. These include the following:

There is thus evidence of a very wide range of antibacterial effect of statins when tested in vitro. [Reference Ko HHT et al - see below]

The next stage would be in vivo testing, that is clinical trials. It is likely that in a trial the antibacterial statin would be given in addition to a conventional antibiotic, unless there is a major antibiotic resistance profile.

There is however clinical experience of the antibacterial effects of statins in humankind. Observations have been made of infections occurring in people taking statins and comparing these with people not taking statins. Some of these observations are as follows:
References can be found below.

These studies are not controlled clinical trials but well structured observations that must not be disregarded.

The future use of statins in bacterial infections

When administered in humans, all statins inhibit HMG-CoA reductase and thereby reduce cholesterol synthesis, but for reasons that are uncertain when tested in vitro statins exhibit a variation in antibacterial activity.

Of the various statins in use at present (for the purpose of reducing blood levels of cholesterol), simvastatin appears to have the best antibacterial effect, and atorvastatin is very similar. However this is still a quite weak effect compared to existing antibiotics to which an organism is sensitive. No doubt new statins will be developed to maximise antibiotic effect regardless of the effect on cholesterol synthesis. They are probably in the process of development now.

Even if statins on their own do not turn out to have adequate antibacterial actions, they could be used in conjunction with present antibiotics to improve action, and more importantly to reduce the emergence of resistant strains of bacteria. This a major opportunity for the future. It remains to be seen whether or not bacterial resistance to statins develops.

Treatment with statins gives a small benefit in the long-term prevention of death from coronary heart disease (CHD). The benefit seems to be greater and more immediate in someone who has just suffered from myocardial infarction (MI). This is a paradox: why should the benefit be immediate if the rationale of treatment is to reduce the blood level of cholesterol over  a long period of time?

The data are almost entirely hidden from view and withheld  from public and even professional scrutiny. However, the embargo on the release of data occurred after the publication of the full data-set in the first primary prevention cholesterol trial, WOSCOPS, the West of Scotland primary prevention trial using pravastatin.

I have displayed in a previous Blog Post the cholesterol-lowering effect data from WOSCOPS, but I will display the figure again as it is so important. 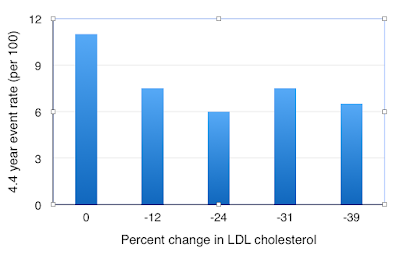 In this figure, the first of the five groups (columns) showed no change in the blood level of cholesterol (0). It was assumed that this group represented the participants in the trial who did not take the statin (pravastatin) as prescribed. This group had the highest heart event rate (10.5 per 100 at 4.4 years) and it was the same as in the control group.

The other four groups showed significant reductions in the blood levels of LDL-cholesterol (between 12 and 39%), indicating that the participants had taken the statin as directed. However there was no significant difference in the subsequent heart event and death rates (between 6 and 7.2%).

There is clearly a small benefit resulting from taking a statin, but there is no association between cholesterol-lowering and clinical benefit. This is an important anomaly, and it indicates that there must be a different mechanism whereby statins give clinical benefit.

It has been known for a long time that statins have an anti-inflammatory effect, and that CHD is an inflammatory disease of the coronary arteries. But now we can see a reason for the anti-inflammatory effect – statins are antibacterial. An antibacterial substance that is originally produced by another micro-organism is an antibiotic. Statins are thus originally antibiotics, but they are now synthesised rather than being produced in a biological broth.

I have indicated in previous Posts that the only plausible cause of CHD is an environmental biological agent, an infection. This also fits in with pandemic nature of CHD in the 20th century: only a biological agent could have such a profound effect in most continents simultaneously. The anti-bacterial property of statins is further but not conclusive evidence that CHD is due to one or more bacteria.

Antibacterial statins can be taken by people at high risk of CHD, but the diet–cholesterol–hypothesis should be abandoned.

5.
Arch Intern Med. 2009;169(18):1658-1667. doi:10.1001/archinternmed.2009.286
Statins for the Prevention and Treatment of Infections: a Systematic Review and Meta-analysis.
Tleyjeh IM et al.
This was a review os 16 study groups.
Nine studies investigated the role of statins in treating infections. The pooled adjusted effect estimate was 0.55 in favour of statins.
Seven studies investigated infection prevention in sick patients. The pooled effect estimate was 0.57 in favour of statin use; there was some evidence of publication bias for this analysis.

6.
Ann Intensive Care. 2015; 5: 9  doi:  10.1186/s13613-015-0049-9
Sepsis outcomes in patients receiving statins prior to hospitalization for sepsis.
Ouellette DR et al
Patients who received atorvastatin prior to hospital admission on account of sepsis and had statins continued in hospital had a very low mortality rate (15.7%) that was significantly less than that of those patients who never received statins (30.8%).

7.
10.1161/CIRCULATIONAHA.117.027966
Antonio J. Vallejo-Vaz et al.
LDL-Cholesterol Lowering for the Primary Prevention of Cardiovascular Disease Among Men with Primary Elevations of LDL-Cholesterol Levels of 190 mg/dL or Above: Analyses from the WOSCOPS 5-year Randomised Trial and 20-year Observational Follow-Up.