Covid-19 & Vitamin D: One year after the onset

We have experienced a year of the Covid-19 pandemic. and now in the UK it is looking very different.

On March 10th 2020 the WHO declared a pandemic of Covid-19. It was on March 20th that the pandemic became real in the UK. Deaths had risen to about 50 per day. On March 23rd there had been a total of 258 deaths, and something had to be done. That something was "lockdown", intended to reduce spread of the respiratory virus. Face masks must be worn in public places, and there was to be social distancing with a minimum of two metres between individuals. People could not visit each other's houses. The residents of homes for the elderly or seriously disabled could not be visited by their families. Public events such as concerts and worship were stopped. Universities were closed and then schools. Holidays were cancelled. Elective admissions to hospital for surgery were cancelled. Many workplaces were closed and air travel virtually came to an end. Public transport was  strongly discouraged and the roads were very quiet.

These were physical methods to try to reduce transmission, but respiratory viruses are notoriously difficult to control. Deaths increased to almost 1,000 per day during the following month. We had no natural immunity and our vitamin D reserves were at the lowest part of the annual cycle. It is much easier to control micro-organisms that are transmitted in contaminated water or food, or contagious diseases that are transmitted by direct contact (touch). Air transmission is not visible and not easily controlled.

The introduction of lockdown was not based on evidence as it had never been attempted previously, at least not on a large scale. It seemed to be sensible, given the very limited understanding by the government of the nature of the pandemic. We subsequently entered the summer recess of Covid-19 illness and death during the "vitamin D immunity season". Later in the year when we moved into the "vitamin D deficiency season", further lockdown measures were introduced.

It is easy to say that the deaths would have been even higher without lockdown, but we must remember that the UK had about the highest death rate from Covid-19 at that time. Since then the UK has been overtaken by nine European nations with higher numbers of deaths per million.

Figure 2 illustrates the 38 nations of the world with more that 1,000 Covid-19 deaths per million. Most are in Europe, with 9 in the Americas. Some of the nations in Europe are very small, Gibraltar, San Marino, and Andorra in particular.

From late April the daily deaths declined in the UK and other northern hemisphere nations, and this coincided with increasing sun energy each day at sea level, and therefore increasing vitamin D production. It can be said that the weather was warmer but humankind is isothermal. We maintain constant body temperature but the average blood level of vitamin D is much greater in the summer than in the winter. The winter–summer pattern of illness is the same in all temperate zone countries, no matter what the ambient temperature. Vitamin D activates defensive immunity and so it is to be expected that the number of deaths from respiratory infections will reduce during the summer, as happens every year. There are in practice two seasons to the year: the vitamin D immunity season, and the vitamin D deficiency season. This is very obvious in Figure 3, which illustrates the effect of the sun and vitamin D production.

The decline in case and death numbers continued into the summer as vitamin D production increased, and blood levels of 25(OH)D, calcifediol, the reserve supply also increased. And then of course, as reserves fell when we entered the vitamin D deficiency season, deaths form Covid-19 increased again.

It is interesting to note that we were warned early in 2020 that it would become so much worse in the autumn as there would be an additive effect of the influenza virus. This showed a fundamental lack of medical education, a phenomenon that I learned when I was at Manchester University in 1964. Observation (that important scientific process that in 2020 was rejected in respect of vitamin D) demonstrated that simultaneous virus infections generally do not occur. A virus is greedy: it does not want to share the infection with a competitor. Covid-19 had an advantage in 2020 in that the human host had not encountered it previously and therefore humankind had no immunity. Covid-19 rapidly established respiratory infection, and in the usual way it programmed its infected cells to produce Interferon. This prevented infection by other viruses.

And that is what happened: during the autumn of 2020 the usual  winter viruses failed to appear. There was just Covid-19.

The increased case and death rate up to the end of 2020 was as expected, but in January there was a sudden peak that has not really been explained. It is shown in Figure 3. Although mutations appear, we were not told of a mutation that would create up to 2,000 deaths per day in January 2021. Many mutations have been described but this is inevitable and there does not seem to have been a rogue mutation. Of course natural immunity optimised by vitamin D would provide defence against all mutations. The reason for the January peak, "the third wave", remains unexplained.

This phenemenon was seen in some other European countries, but not in all. It was obvious in Ireland and Spain. This peak, or wave, settled rapidly at the end of January in the UK and these other countries.

Andalucía in Spain is particular interesting. When the second wave of Covid-19 was very active in October and November, the regional government introduced in November a policy of providing vitamin D in the activated form calcifediol, 25(OH)D, to elderly people. This policy was followed by a dramatic reduction of deaths during December, which I referred to as the "Andalucía miracle" whether the result of intervention by vitamin D or by God. At the end of December vaccine provision was added to the vitamin D initiative.

But as we can seen in Figure 6, in January the decrease in deaths was suddenly reversed. There was a rapid increase in cases, hospital admission, and deaths from Covid-19. A third peak was reached and then a rapid decline, that is very obvious from daily numbers.

After one of the highest Covid-19 death rates in the world, the UK now finds itself in an excellent position.  The UK now appears to be close to the end of the pandemic. 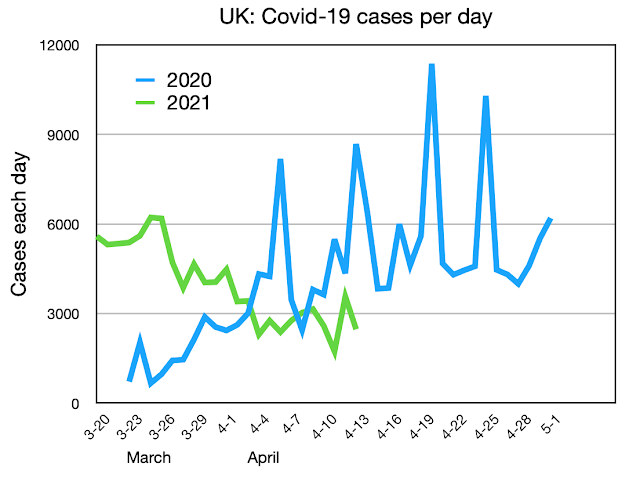 The very low number of death each day now, in early April 2021, is very different what was happening this time a year ago. The trajectory is downwards in 2021.

The difference from 2020 to 2021 is the result of a high level of herd immunity within the nation. It is not that the virus has "gone away", as viruses do not go away. The clinical effects of the virus might "go away" but this is because of herd immunity. It has always been the same.

A recent report (March 30th 2021) from the Office of National Statistics (ONS) informs us that more than half the population have antibodies to Covid-19. How many of these had an illness and how many had received the vaccine were not disclosed. About half the population had received a vaccine during the very extensive vaccination programme, and the number taking vitamin D had increased greatly, but without any national counting. It is suggested that vitamin D consumption has increased by a factor of perhaps 13. On the day of the ONS report Morrison's Supermarket had sold out and further supplies were only on order.

There continues with no official mention of vitamin D. There has been the accumulation of a great deal of knowledge concerning the extent of vitamin D deficiency and the great disadvantage of this when ill with Covid-19, with high risk of critical illness or death. But clinical medicine in the UK remains silent. An as yet unpublished study from Tameside, UK, indicates that 70% of individual doctors would take, prescribe, and advise vitamin D, but this was part of a large grass-roots movement, not officially sanctioned and not measured.

There has been a reduction on the number of Covid-19 cases and deaths in many European countries, but none as dramatic as the UK. The UK has a higher rate of vaccinations than other countries. I display in the figures the deaths per day, but the "cases" (less easily defined) show the same patterns but with larger numbers. The nations are not complete but those that have interested me during the past year.

However the decline is not yet apparent in some other European countries.

These are examples of the experience of several European countries but not all. Some are approaching the end of the pandemic, and it is hoped that the others will follow shortly.

It can be anticipated that during May 2021, as in May 2020, cases and death numbers will fall thought the vitamin D production season. If there is widespread immunity, the increase in the winter will be minimal.

Deaths have also been falling in North America.

What has been happening in tropical countries will be the subject of  future post.