This is the conclusion reached after a 30 year follow-up study of the citizens of the town of Framingham, Massachusetts, USA.

At the onset of the study conventional wisdom was that coronary heart disease (CHD) was the result of excessive cholesterol in the diet, leading to excessive cholesterol in the blood, and as a consequence heart attacks due to the arteries becoming "furred up". This was the diet-cholesterol-heart hypothesis, but it needed to legitimized by a prospective study. The National Heart, Lung, and Blood Institute of the USA chose the town of Framingham for this long-term research project, which started in the mid 1950s.

The publication at the end of the study, entitled "Cholesterol and Mortality", contained the conclusion quoted above. It was met by what can only be termed a stunned silence, and then was quickly put away before the conclusion could enter the public domain. It has remained put away for 25 years.

It is a bit like the long-term research project described in "The Hitch-hikers' Guide to the Galaxy". The objective was to provide the answer to life, the universe and everything. Before releasing the answer the supercomputer (Deep Thought) warned the project team that "You are not going to like this". The answer was 42, and answer that was not expected, and not liked. As with Framingham the expensive project gave the "wrong" answer and huge amounts of money were effectively wasted.

Remember that at least 90% of CHD deaths occur after the age of 50 years. Think how many people above the age of 50 years during the past half-century have had their serum cholesterol level tested to try to predict coronary risk when it doesn’t.

Of course this finding does not fit in with the diet-cholesterol-heart hypothesis, and therefore cholesterol screening continues without critical assessment. At huge expense efforts are made to reduce the cholesterol level of the population to no avail. 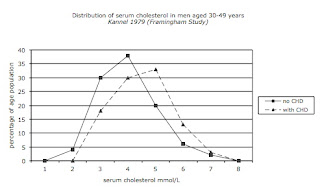 Here we can see the distribution of cholesterol levels in young men aged 30-49 years. We can see that those who turned out to have CHD had on average slightly higher levels than those without CHD. This was expected at the onset of the project.

The data from the Framingham study was presented in a series of survival curves one for each age range and sex all grouping the subjects into bands of blood levels of cholesterol. 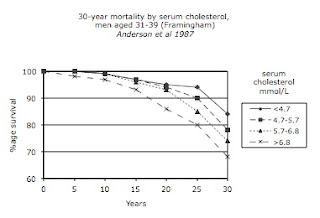 We see the survival curves of the young men, aged 31-39. At the end of the study they were aged 61–69 and we can see that 68% of those with the highest cholesterol were still surviving compared to 84% with the lowest cholesterol levels. So far so good. 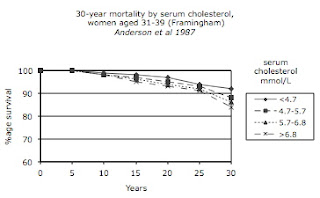 Things were rather different with young women and we know that overall their health is excellent with an advantage over men. Cholesterol level in the blood made very little difference and overall about 90% survived the thirty year study. Cholesterol measurements were not helpful in young women.

We must remember that death from CHD has been rare below the age of 40, and now that the epidemic of CHD is virtually over (see Post 5) it does not occur at all. Most deaths have occurred above the age of 70, but it is important to look at the age-group between 50 and 70, those who have not yet had their three score and ten. 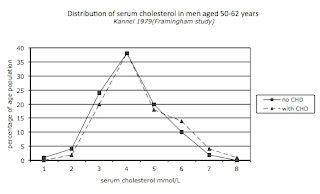 The first thing to notice, published in 1978 but apparently untouched by human brain, is that the distribution curves in men aged 50–62 are identical for those with and those without CHD. In other words blood levels of cholesterol are of no value and do not predict CHD. 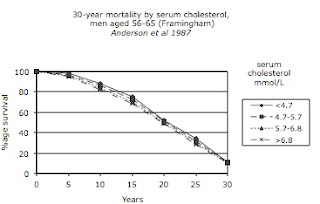 And then we look at the survival curves. As we might expect only 10% of men aged 50–65 surveyed for 30 years. However the important thing is that the blood levels of cholesterol had no influence whatsoever on survival.


So, what is the point of cholesterol testing? The beneficiaries are not the population tested, but think what it has done for the anti-cholesterol industries, pharmaceutical and food production.

The only interesting observation is the over-expression of cholesterol in young men with CHD. This brings us to basic science of the defensive value of cholesterol and the investigation of this has been neglected.