High cholesterol is good when you are older

The obsession of cholesterol during the past half-century has been a triumph of dogma over evidence. There are many aspects to this but one simple but little-known finding is that in people over the age of 60 those with the highest cholesterol level in the blood have the longest survival. It is this age-group that the incidence of death and other cardiac events occur.

The evidence for this comes from three sources. 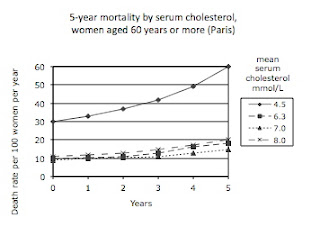 The evangelists of the diet-cholesterol-heart hypothesis would not like this evidence, and it effectively has been suppressed - no-one seems to know about it.  They might argue that the reason for the high death rate in those women with low serum cholesterol is that they were dying of cancer, but this possibility was eliminated at the start of the study and during the five-year follow-up during which 53 of the 92 women died, autopsy revealed cancer to be the cause of death in only one. 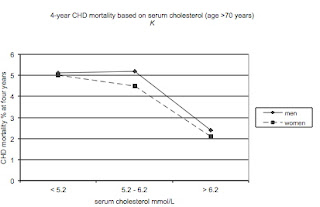 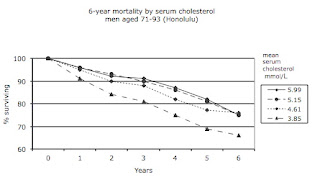 A similar result came from the Honolulu Heart Program, a study of 3572 men aged 71 to 93 years. Survival over a period of six years was expressed in four groups (quartiles) based on blood cholesterol levels. Those with lowest serum cholesterol level had the worst survival, that is the highest mortality. The results were unchanged when first-year deaths were discounted, the purpose of this being to avoid the possible effect of low serum cholesterol and death being due to present but undiagnosed cancer.

In this graph we see the percentage surviving. It was clearly lowest in the quartile with the lowest cholesterol.

The conclusion appears to have been suppressed in the interest of those who benefit from the diet-heart-cholesterol hypothesis - pharmaceutical companies, food manufacturers and the academic departments which derive their funding from them.

There have been no studies published that show anything other than this detrimental effect of a low cholesterol level above the age of 60. To see the truth in younger age-groups you will need to wait for another post shortly.