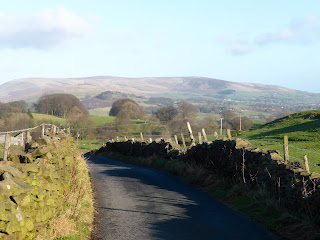 The most important source of information is the 30 year follow-up of the observational US Framingham study, published in 1987. The conclusion (effectively ignored) is as follows: 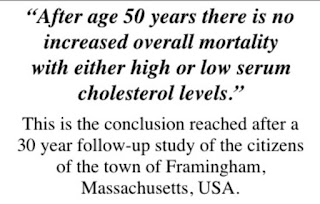 The study did not extend beyond the age of 70 years and so the conclusion is limited. However other studies have shown that beyond this age a high cholesterol level is associated with the best survival. There are three important studies showing this that I have reviewed previously: the Paris study, the Honolulu study, and the Stamford (USA) study. There are several other studies showing the same thing.

Now there is a further study, this from the Aging Research Centre at the Karolinska Institute – Stockholm University.

The study involves the observation of 3090 adults aged 60 years or above, from a population cohort. The average length of follow-up was 7.2 years, that is 23,196 person-years of observation. During this time 1059 participants died, 34.3%.

Compared with those who were still alive at the end of follow-up, and after controlling for age, those who died during follow-up were:


Whether or not the participants died or did not die did not differ significantly:

For the purpose of survival analysis all the participants were divided into three groups based on the blood level of cholesterol at the onset of the study:

The results are displayed in Figure 1.

During the past 20 years an increasing number of the population have been commenced on long-term cholesterol-lowering therapy, and especially statins. This has added a complication to cholesterol-related observation studies, but it is good to see that such studies continue, demonstrating an academic scepticism of the often-stated dogma that “The lower cholesterol the better”. My recent Post of evolocumab shows that this simply is not true, but it is as well that other people think the same as I do.

An important point is that a low level of cholesterol in an individual can be a “natural” level, a person-characteristic, or it can be the result of statin or other cholesterol-lowering medication in someone with a naturally higher level.

In the Stockholm study the participants are divided into whether or not they take statins (and other cholesterol-lowering medications), but statin intervention was not part of the study: it was purely observational.

We can see a similar pattern to Figure 1, but it is a little more complicated.  The blue columns, all participants, are as in Figure 1. But we see in addition the division between those not taking statins (green) and those were taking statins (yellow).

The first group of three columns concerns those with low cholesterol (<5.18). We can see that those not taking statins (green column) have the highest mortality. This is a natural low cholesterol and it is clear that it gives a distinct survival disadvantage – it is a bad thing.

But the yellow column, those taking statins, does not really tell us very much. These participants would have a natural cholesterol significantly higher, but we do not have the information, we do not know the pre-statin cholesterol level.

We can see in the second group (5.18–6.21) and the third group (>6.21) that having a higher cholesterol is associated with a lower mortality rate, a survival advantage, compared to the first group. The participants in the yellow column of first group (those taking statins) would have a similar natural cholesterol level to the second and third groups.

In Figure 3 we can see the same analysis but looking at death from cardio-vascular disease (CVD) – strokes and heart attacks.

The pattern is the same. Those with the lowest blood level of cholesterol have the highest mortality, the opposite of what we have been told. Those taking statins (yellow) in the first group would have a natural cholesterol as in the higher cholesterol groups, and therefore have a similar lower mortality rate.

Finally we see in Figure 4 mortality due to to causes other than cardio-vascular disease. Such conditions would be cancers or  pneumonia.

The pattern is the same, but course the number of deaths is lower in the subgroups than in the total numbers shown in Figure 2.

This is another good quality study that demonstrates clearly, and contrary to what we are generally told, that a high cholesterol level in the blood is a good indicator for a longer than average life expectancy.

Why are we not told this? The information has been available for many years but it has been suppressed.

There are so many vested interests in perpetuating the myth that cholesterol is effectively poisonous, killing us in proportion to its level in the blood. This is the basis of many academic careers and the rationale of cholesterol-lowering medications, especially statins.

The self-appointed and powerful Cholesterol Treatment Trialists’ (CTT) Collaboration controls public and government policy, and falsely perpetuates the identity of cholesterol as the "cause" of heart disease and premature death.

We can see that this is wrong.

If low blood cholesterol is the result of statin or other cholesterol-lowering medication, then there is no survival disadvantage and there is no need for concern.

We can conclude that it is not really the cholesterol level of the blood that determines future health and survival, but what we might regard as "the constitution" of the individual that is responsible that natural cholesterol level.