The Polypill - statistical spin and amplification of benefit 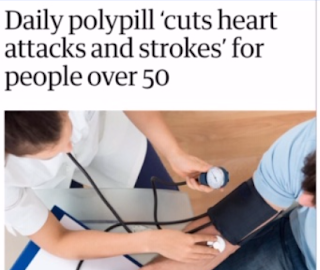 Many people in the world are taking medications of various sorts to improve their health and duration of life, most of these "medications" being futile. Life is at present longer and healthier than has ever been known. We are increasingly free of disease and as a result old age is the expectation for most of us.

But food enthusiasts of various sorts try to persuade us that changing diet can make our lives even better and longer. And there are of course many others who can make money out of our almost universal health pessimism, and our remarkable optimism in the power of medicines and special diets. Although the 20th century epidemic of high mortality coronary heart disease has now come to an end, we are still under pressure to take medications to prevent it.

Many people who are well and disease-free take statins. Many take aspirin. High blood pressure is constantly redefined so as to make more of us have hypertension. Pharmaceutical consumption without need increases, although of course it is necessary for economic growth.

The polypill
If vast numbers of people are taking four tablets per day (statin, aspirin and two to lower blood pressure) it might make life easier for these medications to be combined into just one tablet. This “polypill” has been developed, containing aspirin, atorvastatin, hydrochlorothiazide, and either enalapril or valsartan. Even though the component medications might have been approved, combinations require a separate approval by the pharmaceutical regulating authority, and this requires additional clinical trials.

The polypill trial
The clinical trial of the polypill has now been undertaken in Iran, and it has rather cleverly been called  the PolyIran study. The results were reported very recently in The Lancet, which appears to give special priority to articles promoting cholesterol and statins.

The study involved 3417 subjects allocated to advice care only,  and 3421 subjects advice plus polypill. The subjects were aged between 50 and 75 years and the duration of follow-up was five years.

There were 202 total deaths in the advice plus polypill group, this being 5.9% of the 3421 subjects.

Cardiovascular events
During follow-up, there were:

301 (8.8%) non-fatal major cardiovascular events in those who received advice only, and

202 (5.9%) non-fatal major cardiovascular events in those receiving advice plus polypill.

The difference is 2.9%, the absolute reduction of event rates, meaning that the polypill was effective in the prevention of major cardiovascular events.

The absolute reduction of events by 2.9% does not sound to be very dramatic, and so statistical manipulation follows. 2.9% must be expressed as a proportion of 8.8%.

Once again we can see statistical spin, using the dubious method of taking percentages of percentages.

This spin amplifies the benefit of the polypill from 2.9% to 33%, by a factor of more than ten.

NNT
A useful expression of effectiveness is the NNT, the Number Needed to Treat in order to achieve one clinical benefit, We see in respect of the polypill that for death this is 167.

The paper expressed the NNT for the prevention of cardiovascular events as being 34.5 (100/2.9). This is correct and it means that if 34.5 people take the polypill for five years, one will not experience a major cardiovascular event. The value of this in clinical practice requires an informed discussion between doctor and patient, in this case a disease-free normal person.

Primary prevention only:
By this is meant subjects without a history of cardiovascular disease. Within the discussion section we find:

“The PolyIran study showed that the use of polypill resulted in around a 40% reduction in the risk of major cardiovascular events in individuals without a history of cardiovascular disease”.

It is not easy to identify the origin of the 40%, but it can be obtained from Table 2.

737 of the subjects had a history of pre-existing cardiovascular disease, but the majority 6101 did not have.

Of those without a history of cardiovascular disease (primary prevention) and receiving advice only, 229 out of 3068 experienced a cardiovascular event during the study, that is 7.5 %.

Thus the absolute benefit was a reduction of 7.5-4.5 = 3% in cardiovascular events in those receding the polypill.

More spin
A 3% reduction in events is not very dramatic. How can this number be increased?

40% reduction sound much better than 3%, amplification of effect by a factor of 13.

As I have expressed in a previous Blog post, statistical spin of this sort is disgraceful manipulation designed to mislead the general public and their medical advisors. The expression of proportionate over absolute benefit should be stopped.