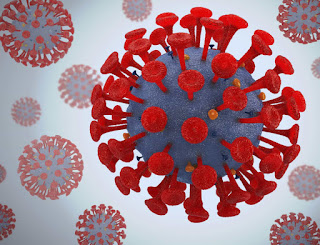 This time a year ago we had no idea what was ahead of us in 2020. After hearing of a new virus in Wuhan, we initially thought that it had been contained by the Chinese authorities. However although Wuhan was isolated within China, the airport was not closed to international travel. The virus spread around the world and reached the UK by air transport. By early April there were  5,000 cases of Covid-19.

By March 23rd there had been 258 deaths. The situation was serious and so the government introduced "lockdown" in an attempt to stop the spread of the virus by using physical means. The success was doubtful, as shown by subsequent events.

Controlling a water-borne infection (usually a bacterium) is possible by the physical process of separating waste from the water supply and purifying the water. Contagious (touching) diseases can be controlled by isolation, but controlling an invisible respiratory virus such as Covid-19 that travels through the air is different. Physical control might have been possible had the first two cases, in York, been totally isolated, but after failing to do so (for reasons that are perfectly understandable) travel took over and the virus spread. Control of the spread of the virus was always going to be impossible and so it has turned out to be. Of greatest importance should have been to minimise the impact of the virus on the human host.

There was at the beginning of 2020 ample medical-scientific knowledge that the most promising way in which to control the impact of the virus on the population would be to correct as quickly as possible the known wide-spread deficiency of vitamin D, knowing that vitamin D has a vital role in activating defensive immunity. This knowledge appears to have been unknown to SAGE, our not-so illustrious Scientific Advisory Group for Emergencies. The potential of vitamin D was ignored and was not used – with one exception. Although vitamin D silence was maintained by his advisors, in November the government Health Secretary Matt Hancock announced that vitamin D supplements would be supplied to the vulnerable residents of care homes. Unfortunately this initiative appeared to be in a setting that would not include research, the advancement of science.

The "first wave" of Covid-19 settled as we moved into the Spring and Summer of 2020. With the onset of Autumn and Winter, a "second wave" occurred, as was predictable. In reality there was just one wave and it was interrupted by nature during the Summer months.

We need to look the pattern that we experienced during 2020.

Figure 1 shows deaths per day. By March 23rd there had been 258 deaths and lockdown was introduced. The effect was hardly dramatic and by early April Covid-19 deaths had reached 1,000 per day. The pattern shows that the decline in deaths occurred in mid-April, at the time that the sun was high enough above the horizon (more than 45 degrees) so that the UV intensity became sufficient to produce vitamin D in our skin. Defensive immunity was thereby activated. The decline of deaths continued and was virtually abolished by August, when blood levels of vitamin D would be highest.

The body would have built up reserves of vitamin D, and so there was a delay after the Autumn solstice before the daily deaths started to increase, but inevitably they would do so. This is the annual pattern not just of Covid-19 but other infections and also all-cause mortality. It shows the power of the sun in controlling life and death on Earth, not just food production but also defensive immunity. It is difficult to think of an explanation for this pattern other than the sun. It might be suggested that air temperature might be the mechanism rather than or in addition to vitamin D production. However humankind is isothermal, and this annual pattern is seen throughout the temperate zones of the northern hemisphere irrespective of air temperature.

Figure 2 shows the number of Covid-19 cases per day. There have been many more cases at the end of the year than at the beginning as testing had become much more extensive.

Once again we can see the suppressant effect of the sun producing defensive vitamin D, and the rise in cases when summer reserves are exhausted. In the northern hemisphere where many millions live closer to the north pole that to the equator, serious vitamin D deficiency becomes very common during the winter months.

We anticipate that the same pattern will occur during 2021, but with reduced numbers of cases and deaths. Herd immunity is developing and will improve with widespread vaccination, more so if vitamin D supplementation is also brought into use. The April–May decline will of course be attributed to the effect of the vaccine and as usual the benefit of nature will be ignored. “The art of medicine consists of amusing the patient while nature cures the disease.” (Voltaire)

The same pattern of Covid-19 deaths can be seen in other European countries, and in Canada at a similar latitude.

The pattern is clear and obvious. Vitamin D produced in the skin by the action of solar UV brings about a remarkable enhancement of immunity and thereby suppresses the impact of infection. Deaths are diminished by 100 or more day.

We can also look back on 2020 to see the relative impact of Covid-19 in various countries. This is achieved by looking at cases and deaths per million population.

The UK level is high but not exceptional.

We can see that in respect of deaths the UK is among those with the highest death rates, disproportionately high compared to cases per million.

It is these careful observations that lead me to the conclusion that what we have been doing is inadequate, and that the number of deaths is not acceptable. We need an additional line of action to control the impact of the pandemic. This is available now and it is vitamin D, or for the seriously ill Calcifediol, its part-activated form that is effective immediately. So far it has been officially ignored

The fact that vitamin D has not been used officially in the UK is the result of unacceptable ignorance at high levels, and a stubborn resistance to learning. No doubt after 70,000 deaths, for the senior culprits to acknowledge the value of vitamin D would mean great humility and "loss of face", characteristics that are uncommon is such people. But humility is a great strength, and the recognition of ignorance is the first step in learning.

In previous posts we have seen the remarkable benefits of Calcifediol in the treatment of Covid-19 pneumonia. The controlled trial was undertaken in Córdoba, a city in the Spanish province of Andalucía and demonstrated 96% efficacy. Vitamin D was brought into wider use in late November, mainly to the residents of care homes for the vulnerable elderly. The benefits are seen in the daily death statistics, as shown in Figure 9.

Once again we can see the dramatic benefit of the sun during the summer months. In addition we can see the equally dramatic effect of vitamin D supplementation given in late November. Daily deaths have fallen from 50 per day to two per day. We should learn from Andalucía.

This is another example of the benefit of vitamin D that no doubt our leaders will choose to ignore.

NICE will no doubt continue to express the view and recommendation:

"Still not enough evidence to use vitamin D at this time."

Basically "at this time" this means that 2 million cases and 70,000 deaths are not of great importance, that there is still no need for the demonstrated benefits of vitamin D to be considered to be useful.

"...at this time" now also includes the time that a mutation variant of Covid-19 is particularly threatening. The activity of the various vaccines against this and other mutations is unknown. What is clear however is that optimisation of defensive immunity is now more important, as this is expected to protect us against all mutations of Covid-19. The need for correction of vitamin D deficiency is greater than ever.

NICE recommendations are recommendations and not directives. The NHS and public health bodies in all nations have the responsibility to make policy decisions, and an evaluation body such as NICE can only advise decision-making and must not have executive authority.