At the onset of the pandemic of Covid-19, a number of mainly medical scientists suggested to the government in a variety of ways, direct and indirect, that it would be sensible to use vitamin D supplements to diminish the impact of the virus on the population. Such medical scientists knew of the vital importance of vitamin D in optimising defensive immunity. They emphasised that vitamin D was cheap, safe, and available immediately. It was envisaged to prevent the rapid and often fatal escalation of the infection due to the "cytokine storm", that vitamin D is known to "switch off".

Unfortunately this advice fell upon deaf ears, and we had to sit and watch while more than 40,000 of our citizens died. Those who understood vitamin D and its common deficiency predicted that those who would be hit the hardest would be the elderly in residential care homes and people with melanin-rich skin, people of black African and Asian ethnicity (BAME). These groups had previously been identified as being at particular risk of serious vitamin D deficiency.

And so it came to pass. 26 working doctors died from Covid-19, and 25 of them had ethnic genetically determined melanin-rich skins. Their  chance of dying in the UK was 20 times greater than in India and Pakistan, and 100 times greater than in equatorial Africa. Vitamin D deficiency was the obvious answer, but it was ignored by the government and its advisors, and also by those responsible for public health policies throughout the UK.

There was a refusal to contemplate giving vitamin D to the citizens of the UK. The reason expressed was that it was "not proven to help in Covid-19 infection". Of course not. Covid-19 was new to medical science and there obviously had not been time to conduct the appropriate trials. For the same reason we do not yet have a tested vaccine.

Those who expressed this opinion had no understanding of the concept of proof. There were demands for randomised controlled clinical trials (RCTs) before it could be used. It was obvious that this would take a considerable time, and so it has. The first RCT result of vitamin D has now become available, but serious illness and deaths have virtually come to an end in Europe.

What has been gained by officially delaying the introduction of vitamin D? Nothing whatsoever. What has been lost? The lives of many people, especially those with melanin-rich skin.

But there has been widespread awareness of the potential value of vitamin D. Word has got around and sales of vitamin D in the UK are thought to have increased by a factor of 30. Perhaps our political leaders and public health officials are taking vitamin D on the quiet. I hope so, but I hope even more that they will spread the message.

Now there is evidence of benefit from Vitamin D that politicians will not be able to deny, but which they might choose to ignore. It has not yet been reported in the UK news media.

So here it is, a review of the the study from the Reina Sofía University Hospital, Córdoba, Spain, which came to my attention on September 3rd.

The study was of 76 consecutive patients admitted to hospital on account of serologically proven Covid-19 infection causing pneumonia as demonstrated on chest X-ray.

All patients were given on admission hydroxychloroquine and azithromycin (antibiotic), together with general support. They were immediately randomised to receive vitamin D or to act as controls and not receive vitamin D. They were allocated electronically in the ratio of two vitamin D recipients to one control

Vitamin D was given as the liver-activated form 25(OH)D, or calcifediol. To become biologically active it must receive within the immune cells (which it ultimately activates) another hydroxyl group to become 1,25(OH)D, or calcitriol.

The initial dose of Calcifediol was 532mcg, (approximately 20,000 units vitamin D). A second dose of 266 mcg (approximately10,000 units) was given on days 3 and 7, and then weekly until discharge from hospital. Calcifediol is measured in mass units not biological international units.

50 patients received Calcifediol (vitamin D), and 26 acted as controls. The two groups were reasonably comparable in respect of prognosis indicators. The outcome measures were the need for ICU admission and death. The decision to admit to ICU would be made without the knowledge of whether or not a patient had been allocated to vitamin D.

Of the 50 patients allocated to receive Calcifediol (vitamin D), 1 (2%) needed to be admitted to the ICU, and there were no deaths.

A report in the Lancet September 8th is that an RCT of azithromycin (included for all in the Spanish study), which was undertaken in Brazil, showed no benefit from the addition of azithromycin to standard care. Unfortunately vitamin D was not used in the Brazil study and death occurred in 42% and 40% of those given or not given azithromycin. It is a disappointment that the Brazil team chose to investigate azithromycin and not vitamin D.

It can be concluded from the study from Córdoba, together with very large published data supporting vitamin D, that vitamin D as Calcifediol is of immense help in the management of Covid-19 infection, reducing the need for ICU support from 50% of the patients to 2%.

This study confirmed what was confidently expected and which to many was  glaringly obvious.

Vitamin D must be taken, ideally well in advance (in other words now) to control Covid-19 infection, to diminish the risk of serious illness and death.

Should serious illness occur, Covid-19 pneumonia, treatment should begin as soon as possible with vitamin D as Calcifediol as in the Córdoba protocol.

This must become official policy. But will it? No doubt sceptics in the ivory tower offices, probably taking vitamin D on the quiet, will demand repeat studies before sanctioning official action.

This result of this study was confidently predicted as there has been ample evidence to support the use of vitamin D in optimising defensive immunity at a time of infection. An RCT was not necessary, apart from satisfying the academic sceptics.

As a result of the result of the RCT in Córdoba, 12 patients needed admission to ICU and two died, when they might not have done had they received vitamin D.

The 26 controls gave consent when entering the study on admission to hospital. Had they been fully informed of the strong potential benefit of the vitamin D that was, with their "consent", withheld from them? Were they aware of their risk of death (ultimately 8% in this study)? If they were too ill to give consent, were their families informed of these risks? 21 of the 26 control patients were younger than 60 and half of them died. Should their relatives and dependents receive financial compensation for their misfortunes that  resulted from this scientific experiment?

I expect that there will be attempts to rubbish this report, and then demand that the study must be repeated. How many human sacrifices will this necessitate?

Will our medical - scientific - political leaders please come clean and tell us whether or not they are taking vitamin D supplements. 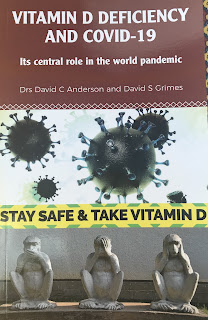