It is interesting to look at the contribution of the 17th century French philosopher, theologian, and mathematician Blaise Pascal to the present pandemic of Covid-19 and the influence of vitamin D.

Pascal's Wager
Pascal's wager was originally applied to the decision whether or not to believe in God, knowing that God's existence could neither be proven nor disproven. To believe would cost nothing, or at best a little time spent in devotion, and might result in eternal happiness. But to deny the existence or God would  cost nothing, with no time in devotions, but if wrong it would lead to eternal damnation. The pragmatic wager was to believe in God.
Pascal's wager is illustrated by a two-by-two contingency table, as I was taught in statistics lectures when I was studying medicine at Manchester University. Its message had laid dormant in my mind until a couple of weeks age when it was retrieved by my learned friend Patrick Gavin.
The basic table is as follows, and the results of decisions go into the boxes A,B,C,D. 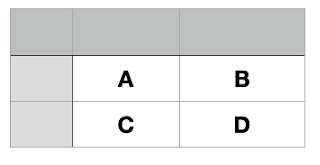 It is conditional on absolutes. God either does or does not exist, and a person either believes in God or does not believe in God.

We can see that belief in God will lead to eternal happiness if God turns out to exist, but if God does not exist, time will have been wasted in devotions instead of a lie-in on a Sunday morning (or whatever for other religions). But if we choose to reject God, we face the prospect of eternal damnation should God turn out to exist, but no loss if God does not exist. Eternal happiness is better than eternal damnation, irrespective of the odds, and so the pragmatic decision is to believe in God. There is no disadvantage.
We can apply Pascal's wager to the decision whether or not to promote vitamin D in an attempt to prevent deaths from Covid-19. I must acknowledge this application to my good friend Patrick Gavin, who is a retired teacher of physics at nearby Stonyhurst College and a man of considerable intellect.
The absolutes are that either vitamin D is of considerable benefit or it isn't, and we can either promote it or reject it. There are no alternatives. We can make the decision as individuals on the basis of evidence given to us, and as personal or public health physicians we must do the same, on the basis (hopefully) of much more extensive knowledge.
The decision whether or not to believe in God is very much a matter of faith, but the decision to promote or reject vitamin D is based on evidence, the strength of which has increased considerably during the past six months. The evidence from Spain and many other countries is overwhelming.

Strong evidence would lead to the promotion of vitamin D. The advantage is that many deaths would be prevented if vitamin D really is effective. If it isn't the disadvantage will just be wasted effort but very little wasted money.
If the advantage of vitamin D is rejected (as is the official government advice at present), and if vitamin D is effective (as the evidence suggests) then there will be many unnecessary deaths. Those officials who reject vitamin D will have blood on their hands.
In September 2020 the weight of evidence in favour of benefit from Vitamin D during the pandemic of Covid-19 is overwhelming. It is thus clear that rejecting vitamin D as a health policy is responsible for many deaths now and in the future. It is a policy that is clearly negligent.
But perhaps there is a reason for the government and its medical advisors rejecting the use of vitamin D. If so it must be a very strong reason, and if so it would appear to have no medical basis. The cost is only about £$€ 10 per year and this is not a valid reason for rejection of vitamin D. There are no side-effects at a dose of maximum 10,000 units daily, with half that being the usual recommendation to optimise immunity.
But there must be a reason to reject vitamin D.
Vested interests
The UK Health Secretary Matt Hancock told us on the morning radio on September 18th that government policy is to "hold" the pandemic until a vaccine becomes available. On September 22nd, Matt Hancock told parliament that :
"Vitamin D does not appear to have any impact on reducing the incidence of Covid-19"

This is simply not true. It is either a lie or it is ignorance, both being inexcusable with so many lives at stake. Of course as a politician he is lkeiely to be "economical with he truth". He cannot be expected to have read medical papers, but he has medical scientific advisors who we would expect to be up-to-date. Who are they?
Chief Medical Officer Professor Chris Whitty, who is on the board of CEPI, Confederation for Epidemic Preparedness Innovations, "New Vaccines for a Safer World", and he chairs the London branch. It has received funding from several governments, the Bill & Melinda Gates Foundation, the Welcome Trust, and it has received £20 million from the UK National Institute for Health Research, which Whitty co-chairs. We can see from a press release from September 21st that CEPI has expanded investment into vaccine research, but there has been been no documented research into vitamin D. 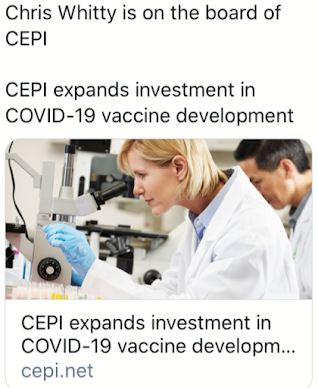 Chief Scientist is Sir Patrick Vallance, formerly having a high position in GSK (GlaxoSmithKlein), a high profile vaccine manufacturer with an important facility in Barnard Castle (remember?). Press releases (Times and Mail) from September 24th are shown below.

It is interesting to note his previous experience with vaccines.
The vaccine Pandemrix was manufactured by GSK and was introduced in 2009 as vaccine to prevent swine flu, a pandemic that did not materialise. It was given an accelerated provisional licence by the EU but not in the USA. It was given to 6 million people in Europe, many of them young people. In 2010 there were reports in Finland and Sweden of an unusual increase in the frequency of narcolepsy in young people. This is a brain disorder characterised by uncontrollable attacks of sudden deep sleep. It became a small but widespread epidemic and it was identified by the UK Patient Safety Agency (now part of PHE) to be due to Pandemrix. The licence was revoked in 2014 and it was withdrawn from use.
Sir Patrick Vallance is hardly to blame for this, but It might be thought that this experience would cause hime to be cautious in his approach to vaccines, but not so, Once bitten easily forgotten.
Vaccines and Vitamin D
The very successful vested interests in the heart of government must cause concern. The need during the pandemic is for the population to become immune to the new virus, and this can be achieved in two ways. The one chosen by the government is to produce a vaccine, but this would be active against just one virus, and perhaps not against a mutation of it. Also it would take at least a year to develop and test, and as we have seen the major impact of the epidemic is likely to have been passed by then
The alternative is to optimise the immunity of the population, and this can be achieved issuing vitamin D supplements. Ideally we need to make certain that blood levels of vitamin D are about 40ng/ml (100nmol/L). Blood testing for all might take a few weeks, but vitamin D supplementation would be immediate.
Herein lies the problem: if vitamin D been issued at the same time as lockdown on March 23rd, the pandemic might have been over by now, with work, transport, education, worship, family gatherings, social events etc being once again part of our lives. Had vitamin D been so successful, what would. be the need for a vaccine, if only to prevent a common cold? And what of possible side-effects?
So silence of vitamin D had to be maintained. No reading of evidence, no speaking of evidence, no listening to evidence.
The conspiracy of silence and the denial of evidence has been very successful – so far. But one day the truth will be revealed to all. 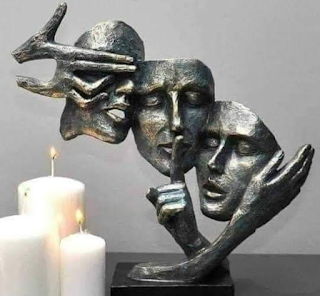