The evidence that a low blood level of vitamin D leads to an increased risk of serious or fatal Covid-19 infection, compared to those with higher (ideal) levels, is indisputable. There is widespread deficiency of vitamin D and this is a world-wide phenomenon. 47% of the population pf Spain are deficient in vitamin D, and 80% of those admitted to hospital with Covid-19.

There are several reasons for this widespread deficiency, including extensive skin cover by clothing, many more people working indoors, and in the age of air conditioning many people seeking leisure indoors where it is cooler. The problem is compounded by much of the population living in the temperate zones of the northern hemisphere where the sun produces vitamin D in the skin for only six months of the year. This puts people with melanin-rich skin living in temperate zones at a great disadvantage, as melanin blocks much of the UV light and diminishes vitamin D production. The atmospheric pollution of world cities blocks UV light penetration to ground level and also reduces vitamin D production.

The benefit of treating with Covid-19 pneumonia with vitamin D patientshave been demonstrated in Singapore and Córdoba, Spain. The latter was a randomised controlled trial, using Calcifediol, the part-activated form of vitamin D.

But the government and its advisors deny that vitamin D should be used as a prevention or treatment of Covid-19. A fact that is hard to believe is that the advisory body NICE (National Institute for Health and Care Excellence) has advised that the very positive study from Córdoba should not influence the way in which patients with Covid-19 pneumonia are to be treated. This is outrageous.

It is claimed that there is an absence of "proof"

When most people use the word "proof" they only rarely understand the meaning of the word. When challenged, they will usually say "Well, you know, er...."  But is essential to understand what it means.

Proof is "The fulfilment of pre-determined criteria". In other words the question of proof must be thrown back at the sceptic. He or she must decide the criteria that would be accepted as proof of a given proposition. Proof would be based on the evidence that would lead to the recognition of truth. The criteria must be testable, real science.

The problem is that there is no absolute truth, and the evidence of proof is always pragmatic. New evidence might bring about a re-evaluation of truth. For example the proposition that the sum of the angles of a triangle is always 180 degrees was accepted until the 20th century when the  triangle was superimposed on the curvature of the Earth.

The important decision in reaching the truth is based on the legal concept of the weight of evidence, but then there is a problem. Karl Popper used the example of swans, in which a proposition  might be made that all swans are white. Researchers might travel widely counting white swans thereby adding to the "weight of evidence". But then a black swan is discovered. The truth of the proposition does not become determined by the majority. The weight of evidence might be in favour of swans being being white, but the single black swan invalidates the assertion. Popper championed falsification (the null hypothesis) as the true pursuit of experimentation,

We must be careful. The propostion that low levels of vitamin D lead to a increased incidence of critical or fatal Covid-19 is not quite so black and white as swans.

It might be found that some people with what are considered to be ideal blood levels of vitamin D might become critically ill and die from Covid-19. We know that some people have a genetic inheritance of sub-optimal vitamin D receptors (VDR), called polymorphisms. This is has been recognised in the clinical syndrome of "vitamin D resistant rickets", in which vitamin D does not work. Its target molecule (VDR) is defective and so the key does to fit in the lock. This has been found to be relatively common in people with tuberculosis, leading to sub-optimal immunity.

But it is rare and we must look at the great majority when seeking proof, accepting exceptions.

An experiment must always have controls, and I first learnt this in science at school. If we want to investigate the proposition that the growth of a seed requires the presence of water, we put two seeds in two pots of compost and apply water to just one. The criterion of proof is that all other things being equal only the seed exposed to water will grow.

As in mathematical solutions, we would then state "QED", quod erat demonstrandum, that has been demonstrated, proved.

Simple experiments in humankind are usually not quite so straightforward, but they can be. Correction of deficiency states are easy to understand once that the deficiency is understood by measurement of a physiological parameter. It became clear that Type 1 Diabetes is due to deficiency of insulin, the failure of  insulin being manufactured in the pancreas. The administration of insulin to someone in a diabetic coma was like a miracle, there having been many unfortunate "historical control" patients who had died before the discovery of insulin (I appreciate that the measurement of insulin in the blood was not possible at the time, but it could be inferred). The clinical experiment of a randomised controlled trial (RCT) was unknown at the time (1922) but it might be enforced today. Similarly deficiency of thyroid hormone and its replacement in treating myxoedema, or cortisone in Addison's disease.

Asleep at the wheel

During the pandemic of Covid-19 there has been a refusal rather than a reluctance to consider vitamin D deficiency as a major risk factor for critical and potentially fatal disease. There has been in the UK no co-ordinated  effort to investigate the extent of vitamin D deficiency, no effort to associate it with the level of severity of Covid-19, and no attempt to provide vitamin D replacement therapy for those deficient. The evidence of 18 published studies has been ignored, and there has been no scientific undertaking to disprove the proposition.

The UK has witnessed almost 50,000 deaths, and yet the government or its advisors have failed to provide a very cheap, very safe, and readily available way to minimise deaths.

If lack of proof, or rather a serious lack of understanding of proof, has been paralysing the government and its advisors, let me bring to attention the very important work of the distinguished British statistician Sir Austin Bradford Hill, who I have mentioned in previous Blog posts. Repetition can be essential.

Sir Austin Bradford Hill and Sir Richard Doll produced in 1950 the important study that brought about the general acceptance that cigarette smoking causes lung cancer, using a sample of doctors who declared their smoking habits. It was a time-related (temporal) observational study and the results can be seen in the figure. 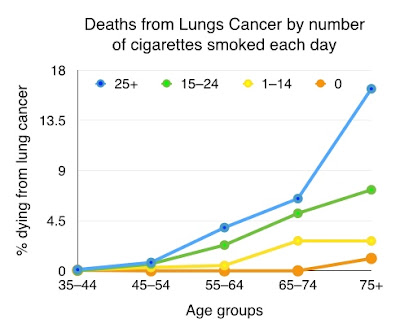 It is obvious that the more cigarettes smoked per day, the greater the chance of dying from lung cancer.

Note that this was not a double blind randomised controlled trial. To create an RCT would have been an impossible task. Think about it. It was an observational study, a method discounted by our supposedly betters concerning Covid-19 and vitamin D.

The authors of the study had thought about the meaning of proof, and in 1965 Bradford Hill produced  a set of criteria. He considered that if these were met, it would constitute "proof". 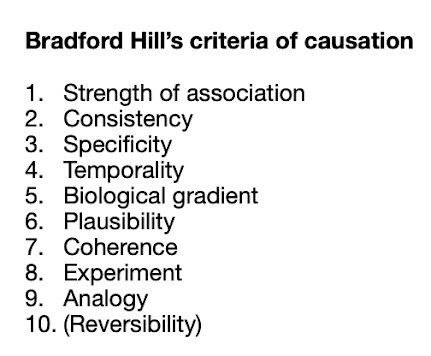 We must apply these to the proposition that:

The studies quoted are reviewed in a previous Blog post

A study from India demonstrated the following association in Covid-19:

I have mentioned a study from Spain (published on October 27th 2020):

2. Consistency of association:
Similar associations were demonstrated in:
Newcastle upon Tyne https://www.medrxiv.org/content/10.1101/2020.06.21.20136903v1
Iran https://www.ncbi.nlm.nih.gov/pmc/articles/PMC7455115/
Turkey https://link.springer.com/article/10.1007/s12603-020-1479-0
Mexico https://www.medigraphic.com/cgi-bin/new/resumen.cgi?IDARTICULO=93773
St Petersburg DOI: 10.22625/2072-6732-2020-12-3-21-27
3. Specificity:
The studies that I have listed are specific for the link between low levels of vitamin D and high risk of critical illness or death from Covid-19. However I accept that not everyone with a low blood level of vitamin D will become seriously ill or die from Covid-19 infection. Similarly, not everyone who dies from Covid-19 is deficient in vitamin D. There are other factors at work in a sub-optimal immune system (for example VDR polymorphisms), but it is not possible to measure "immunity" directly.
4. Temporality:
The association between cigarette smoking and lung cancer was criticised on the basis that having lung cancer might cause people to having smoked cigarettes decades earlier. This is called "reverse causality" but one the example illustrated it is not very plausible.
It has been stated with some truth that a serious infection with Covid-19 reduces the blood level of vitamin D. I have indicated previously that this is true in that vitamin D (as the active 1,25(OH)D) is consumed, irreversibly inactivated after use. It is therefore essential for the blood level of 25(OH)D not to be low in advance of the infection. A reservoir of 25(OH)D in the blood is essential if a serious infection occurs so that production of 1,25(OH)D can be escalated.
It is important that observations are time-related, the sequence of events being demonstrated rather than just a "snapshot". Temporality means the ability of a low level of vitamin D to predict critical or fatal Covid-19. This has been demonstrated in the following studies:
Bari.
Blood level of vitamin D >30ng/ml, 5% died subsequently
Blood level of vitamin D <10ng/ml, 50% died subsequently
http://www.societaitalianadiendocrinologia.it/public/pdf/hypovitaminosis_d_covid19.pdf
Israel  https://www.medrxiv.org/content/10.1101/2020.09.04.20188268v1.full.pdf
Heidelberg. https://www.mdpi.com/2072-6643/12/9/2757
Boston https://doi.org/10.1371/journal.pone.0239252
Tehran https://journals.plos.org/plosone/article?id=10.1371/journal.pone.0239799
Santander  https://beta.ctvnews.ca/national/health/2020/10/27/1_5162396.html
France. https://www.sciencedirect.com/science/article/pii/S096007602030296X?via%3Dihub
5. Biological gradient:
This criterion is met by looking at a range of blood levels of vitamin D and relating them to the development of or the outcome from Covid-19. This information is best illustrated in the study from Israel, but there are limitations as it looked at ethnicity and infection, and did not include deaths. In respect of Covid-19 infection rates, there appeared to be a threshold level at 30ng/ml, above which infection rates drop to half compared to lower blood levels.
https://www.medrxiv.org/content/10.1101/2020.09.04.20188268v1.full.pdf
A biological gradient was demonstrated in the Heidelberg study, with unfavourable outcome progressively increasing with decreasing blood vitamin D levels. The hazard ratio, the risk of adverse events, for the lowest vitamin D levels was 14.73 compared to the highest, with a gradient between.
Hazard ratios for death:
Vitamin D >30ng  HR = 1.00
Vitamin D <20ng  HR = 11.27
Vitamin D <12ng  HR = 14.73
The gradient can be seen on the graph. The higher the blood level of vitamin D, the lower the death hazard (>20ng/ml is standardised as 1). 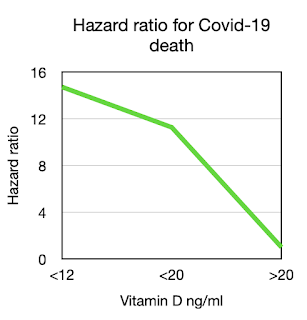