This was the headline of news media in the UK on the evening of Saturday August 14th. It shows that Carrie Johnson, the wife of the Prime Minister, has been seriously misinformed, and that she is not an appropriate person to be advising the public on health issues. She is not a medical scientist.
Unfortunately, she does not realise that her recent miscarriage, sad as it was, almost certainly resulted from her first vaccination, but I do not have the precise time-line. Did she complete a Yellow Card to record the time-link between her first vaccination and the miscarriage? Do any women who have miscarried do this if the miscarriage occurs within three months of peri-conception vaccination?
Carrie Johnson is not the only person to be urging pregnant women to be vaccinated:

I have indicated in a previous Blog post that I have been concerned about deaths from Covid-19 of pregnant women in the UK, especially as most of them are of South Asian ethnicity. Vitamin D deficiency was almost certainly the major causative factor, and certainly the only factor that could have been corrected immediately. By government directive, vitamin D, like ivermectin and hydroxychloroquine has not been used in the UK for the sick and dying from Covid-19, a national disgrace.

Now there is the issue of whether or not pregnant women should be vaccinated against Covid-19. It is a contentious issue because we know that medicines given during pregnancy can have damaging effects. It is vital that new medicines are tested thoroughly before being given to pregnant women. Covid-19 vaccines are new medicines, and similar medicines have never been used in the past.

Human testing of a new medicine must be with careful randomised controlled trials, and these must include signed informed consent. This is particularly important in the new vaccines because they are not yet licensed: they are used under Emergency Use Authorisation, which implies that they remain experimental.

Randomised controlled trials of vaccines given in pregnancy have not been undertaken, but many pregnant women in the USA in particular have received vaccines. Did the women give signed informed consent?

"Language designed to have a persuasive or impressive effect, but which is often regarded as lacking in sincerity or meaningful content."

The debate continues in the UK, but debate and science are by-passed by media pressure for pregnant women to be vaccinated. Pregnant women are understandably hesitant, but rather than listening to their concerns and looking at the science, pressure is put upon them to change their minds.

The pressure is even coming from "England's Top Midwife":

Jacqueline Dunkley-Bent, Chief Midwifery Officer for England, said: “Vaccines save lives, and this is another stark reminder that the Covid-19 jab can keep you, your baby and your loved ones, safe and out of hospital".5 Aug 2021 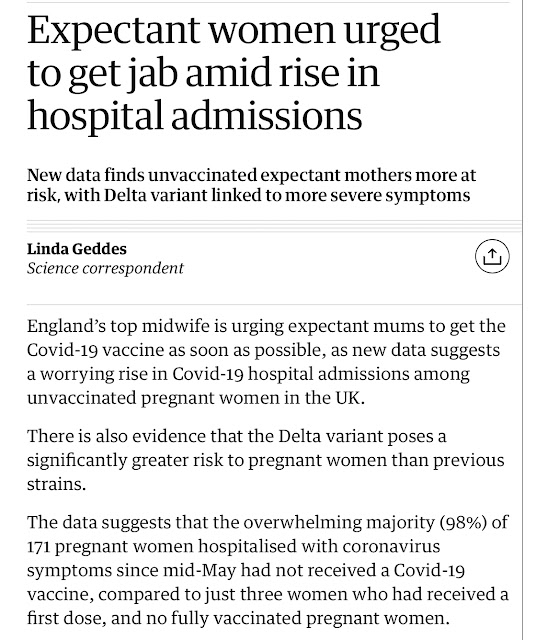 Jacqueline Dunkley-Bent and Linda Geddes are seriously misinformed.
The data

The data presented appear to be dramatic, in fact too dramatic:

171 pregnant women admitted to hospital in the UK on account of Covid-19.

Such a huge difference is very surprising. Is vaccine hesitancy in pregnant women really so strong, 98%? If so, notice should be taken of this rather than just persuading them to change their minds.

1. Vaccination is spectacularly successful in preventing Covid-19 in pregnancy (hence only 3 vaccinated pregnant women with Covid-19 in this study of 171).

2. Vaccination is spectacularly successful in preventing successful pregnancy (hence only 3 vaccinated pregnant women in this study of 171).

We need more information, and it is readily available from observation of pregnant women vaccinated against Covid-19 in the USA.

The study in the New England Journal of Medicine.

In this study the manufacturers of the vaccines were either Pfizer-BioNTech or Moderna.

127 were vaccinated in early pregnancy, 92 of them during peri-conception, that is, shortly before pregnancy or during early pregnancy, up to 30 days before the last menstrual period (LMP) or up to 14 days after the LMP.

We are not given a breakdown of data on the 92 and the remainder of the 127, so they must be analysed together.

700 received vaccine in third trimester of pregnancy, this being after 27 weeks (27/40)

104 of the pregnant women had a miscarriage, spontaneous abortion (SA) in medical terminology.

This formed the conclusion of the paper, reassuring women all over the world that this is an acceptable miscarriage rate, not dissimilar from "normal experience".

BUT THERE IS SOMETHING SERIOUSLY WRONG WITH THIS CALCULATION

This section has been corrected

We can be clear about the numerator, 104 miscarriages. This is what we are investigating.

2/4=50%. If we want to reduce this percentage, we need to make the denominator bigger.

What has happened in this paper is that the denominator has been made bigger, from 127 to 827.

A few simple facts are necessary to help understanding about pregnancy, perhaps those conducting the study were ignorant of thes facts..

If a pregnancy comes to an end after 23 weeks but before full term normal birth (40/40) it is called a premature birth, or a stillbirth if the foetus has died in utero.

The first trimester, up to 13 weeks, is the embryonic stage, and understanding this is of vital importance. The embryo develops from a single fertilsed cell which divides and differentiates into its human form. It is during this differentiation and formation that the embryo is highly vulnerable to damage with consequent abnormalities. Examples are medical teratogenicity due to thalidomide or anti-epileptics, also viral damage due to rubella. Severe damage can result in miscarriage.

When the embryo has reached its human form, at just before 13 weeks, it becomes a foetus. The process for the remaining two-thirds of gestation is for growth and maturation rather than differentiation. Brain maturation is particularly important in the third trimester.

The NEJM paper tells us that 700 of the 827 were vaccinated only in the third trimester, 27 to 40/40. By definition this is much too late for a miscarriage. These 700 pregnant women could not have had a miscarriage, and so they cannot be included in the denominator of the calculation of miscarriage risk.

The reality is this:

104 of them had a miscarriage, the great majority we are told being in the first 13 weeks, the embryonic stage. Miscarriage is embryo loss.

But the 127 were only a subgroup of 1132 pregnant women who received the vaccination during the first trimester with the great majority remaining pregnancy at the time of the study.

Read more of this in the next Blog post.

WHY DID THIS DISTORTION OF STATISTICS HAPPEN ?

This true miscarriage rate has been hidden from the world by a paper that is so badly written that the large number of words disguises the important numbers. The conclusion is either seriously at fault or is fraudulent. How it passed peer review to be be published in the prestigious NEJM is a mystery.

It seems to me that there was a failure to understand the difference between an embryo and a foetus, and the huge difference between exposure of an embryo and exposure of a foetus to a potential poison, whether biological or chemical. It is important to note that the miscarriages occurred during the embryonic phase. Pregnancy is divided into three trimesters for a good reason, as the stages are distinct and should not be combined into one in scientific analysis.

We have much to learn from the thalidomide tragedy of the late 1950s. If the pregnant women took thalidomide (to help with sickness) in the embryonic stage, the baby was in danger of being born with brain mal-development, eyes incompletely formed, or serious limb shortening. If however thalidomide was taken after day 42 following conception there was no damage to what by then would be be the foetus.

Few people will take the trouble to access and look at the paper, and those who do will probably read just the abstract and perhaps the conclusion. These can be effectively fiction, the conclusion that is politically convenient.

What do we do now?

As a clinical doctor I have always been cautious, well-aware of the dictum "Primum non nocere" (first do no harm), part of the Hippocratic oath. I am only too aware that it is much easier to do medical harm to people than to do good, and so restraint and caution are very important. "Evidence-based medicine" has become a dictum in recent years, but during this pandemic control of medicine has shifted from professional to government authorities, which have shown restraint only in treatments other than vaccines, and then total restraint without science.

Vaccinations are being given on Emergency Use Authorisation and use should be scientific, based on a prospective research protocol so that we can learn. But this is not happening. The study described above was retrospective and opportunistic. It provided very useful data, and it is the best that we have. It is probably too late for prospective structured research into the effect of vaccination on the outcome of early pregnancy.

To continue to vaccinate women in late pregnancy is reasonable, as it would have been reasonable to continue prescribe thatlidomide to women late in pregnancy. We have seen clearly that the miscarriages occured early and perhaps mainly before the pregnancies would have been officially recorded. Research into the outcome of pregnancy must therefore be based on a data-set of vaccination of all women of child-bearing age, including those not yet pregnant, as was the study published in the NEJM.

However this will no longer be possible prospectively  as informed consent for vaccination of such women must include information that very early and peri-conception vaccination will give risk of miscarriage at present unknown, but not the risk given in the NEJM paper. Would a woman accept this risk?